Pavel Datsyuk scored the game’s only goal in the closing minutes of the third period on Friday night and Jimmy Howard made 25 saves as the Detroit Red Wings earned a 1-0 win over the Boston Bruins in the opening game of their Atlantic Division Semifinal matchup.

Datsyuk’s highlight-reel goal with 3:01 remaining in regulation broke a scoreless tie. At the Detroit blue line, Datsyuk reached behind himself with one hand on his stick to collect a pass from Johan Franzen, knocking it up between his own legs as he broke through the neutral zone. Gaining the Boston end, he cut to his left, using the Bruins defenders for a screen before snapping a heavy shot past Tuukka Rask.

The Bruins would pull Rask for an extra attacker in the final minute but could not pull even.

The shutout was the third of Howard’s playoff career and came in his first-ever Game One road win.

Rask made 23 saves on 24 shots in taking the loss.

Neither team scored a power play goal on the night. Detroit had two chances with the man-advantage to the Bruins’ one.

The teams will meet on Sunday afternoon in Boston for Game Two of the series.

Boston forward Milan Lucic speared Detroit defenseman Danny DeKeyser between the legs at the end of the first period. He was not penalized for the play. 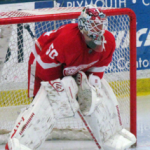 Todd Bertuzzi scored on the final shot of the shootout Friday afternoon, giving the Detroit Red Wings a 3-2 win over the Boston Bruins in the NHL's inaugural Thanksgiving Showdown.

Pavel Datsyuk scored Detroit's first goal and made a slick stick play to set up another as the Red Wings earned a 4-1 win over the Pittsburgh Penguins.