With an expected game-time temperature of somewhere around 17 degrees Fahrenheit on Wednesday, one thing is pretty certain for the 2014 Winter Classic: It’s going to be cold. Not the -8 degrees it was in Edmonton for the original Heritage Classic but no one would expect that in Michigan anyway.

For reference, the last outdoor game at Michigan Stadium – the 2011 “Big Chill at the Big House” between Michigan and Michigan State – started at 41 degrees, knocked all the way down to 34 with wind chill.

At Wrigley Field in the 2009 Winter Classic, where the Red Wings visited the Chicago Blackhawks, it was all of 32 degrees.

The game that started the recent trend of outdoor hockey matchups, the Cold War game between U of M and MSU at Spartan Stadium in 2001, nearly didn’t happen due to rain in the week leading up to the event. It dropped below freezing in time for everything to come together.

My Weekend Without Wings: Part Two

Turns out that I didn't miss the Red Wings' game in New Jersey Saturday night after all, so my weekend wasn't quite as Wing-less as expected. After missing Friday night's win over the Canadiens, I'd expected Saturday's Big Chill at the Big House to be all of my hockey for the day. 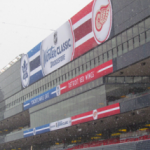 Ranking the Red Wings' four outdoor appearances, now that the Centennial Classic is in the books.