As I write this, it’s 6-1 Ottawa over Detroit. It’ll probably get worse before the game ends, with how it’s gone thus far.

The Red Wings just had nothing tonight. Outside of a couple shifts in the first period, absolutely nothing clicked offensively and almost everything went against them defensively. Both goalies were victims of that.

There’s absolutely no excuse for that. Especially given how much was made of the game as Daniel Alfredsson‘s first against the Senators team he captained for so long.

I’m gonna go to bed and forget this happened. The Red Wings had better not. They need to re-learn that this kind of effort (or lack thereof) is unacceptable. 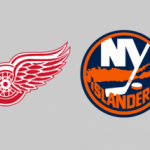 It's been awhile since the Red Wings finished off their slightly-incredible 5-4 OT win over the Pittsburgh Penguins and I'm still not entirely sure where I want to start my postgame notes.

I had to leave during the first period when the Red Wings were up 1-0. Came back near the end of the game. Immediately deleted it off the DVR.