The Detroit Red Wings got two goals in the final 7:02 of play on Sunday but it wasn’t enough as they dropped a 4-3 decision to the Chicago Blackhawks.

Tomas Tatar opened the game’s scoring for Detroit before the Blackhawks rattled off four consecutive goals.

At 7:29 of the first period, Gustav Nyquist won a battle for the puck behind the Chicago net, then sent it out front to Tatar for a quick wrister past goalie Corey Crawford.

Just 1:49 later, Detroit netminder Jimmy Howard couldn’t corral an awkward rebound and defenseman Brendan Smith opted to skate with the puck rather than shoot it clear. Chicago’s Byron Froese poked it away from Smith and swatted a shot past Howard to tie things up.

The Blackhawks took the lead with 2:54 remaining in the first. Defenseman Alexey Marchenko mishandled the puck along the left wing boards in the Detroit zone and gave it away to Joakim Nordstrom, who broke in on goal and around Smith, firing a shot that ramped up Smith’s stick and past Howard to make it 2-1.

After a scoreless second period, Garret Ross capitalized on a miscue behind the Detroit net to make it 3-1 at 2:29 of the third. Howard went behind the net to play the puck and Smith came through as well, attempting to send a pass to Henrik Zetterberg in the corner but missing and putting it right on Ross’ stick. Ross flung it on net from the right wing boards and Howard got back into the crease just in time to get a piece of it with his skate and knock it into the net.

Froese’s second of the night would make it 4-1 just 56 seconds later, as he was left open in front of the net to take a feed from Brent Seabrook in the corner and knock the puck past Howard.

Though Howard was scheduled to play all 60 minutes of the tilt, Jared Coreau replaced him in the Detroit net after Chicago’s fourth goal.

Tatar deflected a Nyquist shot from the left faceoff circle past Crawford on a power play with 7:02 remaining to pull Detroit to within two goals.

With 41 seconds left and Coreau on the bench for an extra attacker, Jonathan Ericsson sent a seeing-eye shot from the right point through traffic to make it 4-3.

Crawford would make a toe stop on the goal line in the closing seconds to prevent the Red Wing from tying things on a goalmouth scramble.

Crawford finished the night with 30 saves on 33 shots against. Howard made 16 saves on 20 shots while Coreau stopped all four chances he faced.

Tatar’s second was the only power play goal of the night. Detroit had four chances on the power play to Chicago’s three.

A flurry of shots during a last-minute power play wasn't enough for the Detroit Red Wings Tuesday night, failing to score a tying goal and falling to the Carolina Hurricanes, 3-2.

The Detroit Red Wings rallied from a 3-1 third-period deficit Friday night but it wasn't enough to earn the win, falling in overtime to the St. Louis Blues, 4-3. 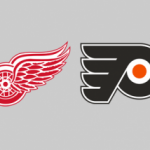 The Detroit Red Wings scored twice in the third period but couldn't pull even with the Philadelphia Flyers, who rode a three-goal second period to a 3-2 win, their first victory at Joe Louis Arena since November 4, 1988.