Almquist broke a 1-1 tie with a power play goal at 6:10 of the second period. After an attempt in the left faceoff circle by Brendan Smith, the puck came out to Almquist at the blue line for a slapper through traffic and past Pittsburgh goalie Tomas Vokoun.

The Swedish blueliner added another goal on the man-advantage with 8:10 remaining in the period, firing a shot from the high slot through a screen by Justin Abdelkader.

Pavel Datsyuk rounded out the game’s scoring with 2:01 left in the middle frame, faking around Paul Martin to put a shot from the right circle on Vokoun, then cutting through the slot to pick up his own rebound and backhand it past the Penguins netminder.

Tomas Tatar had gotten Detroit on the board with 7:04 remaining in the first period, stuffing the puck past Vokoun from in close.

Brandon Sutter scored Pittsburgh’s only goal of the game 1:05 into the second period, snapping a shot past Jimmy Howard on a two-on-one.

The Red Wings finished the night two-for-five on the power play while the Penguins went scoreless on their five chances with the extra attacker.

Howard stopped 13 of the 14 shots he faced across the first two periods. Petr Mrazek went 10-for-10 in the third. Vokoun stopped 11 of 15 in 40 minutes before Eric Hartzell took over and stopped all four shots he faced. 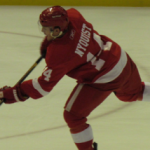 The Detroit Red Wings score two goals in the final three minutes of regulation and added another late in overtime to rally for a 4-3 win over the Pittsburgh Penguins Thursday night.

Drew Miller scored the only goal for Detroit on Wednesday as the Red Wings dropped a 5-1 preseason decision to the visiting Pittsburgh Penguins.