I was going to write a post today about how great it is to see the youth movement in Detroit coming up big in the playoffs. The new era is shifting well though its growing pains. Gustav Nyquist made NHL history when he became the first rookie to record his first two playoff points both in overtime (goal, assist – two different games for those that were all “huh?”)

Then came the internet. Twitter today has been busy with Red Wings banter. Too bad it’s all been about boob jiggles and some writer over at MLive that no one has ever heard of before.

This moron; whom I wont name or post a link to his piece of crap article to give him more attention, has now been named the “flag bearer” for the Red Wings fan base.

Congratulations Red Wings fans you now know nothing about the sport according to everyone with a Twitter account.

Can you name five players not on the Red Wings roster? In my experience most hockey fans can; but because one not even halfassed writer decided to claim no one can (also claims Detroit has no national coverage – which I thought was the big drawback to the Wings moving is it that the West will have less coverage?

Two rookies score last night against the Ducks and all that is being discussed is moronic statements within piss poor writing and boob jiggles. I’d make a pun about who is the bigger boob but that would be too easy.

The NHL Fans' Association released a letter Monday morning detailing the NHLFA's plan to avoid a lockout upon the expiration of the current collective bargaining agreement between the league and the players. The letter was sent to National Hockey League commissioner Gary Bettman and NHL Players' Association executive director Bob Goodenow, as well as various media outlets. 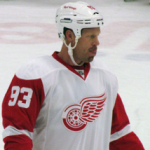 I expect this to be a pretty long and babbling post so let's just get the sound byte that everyone really wants out of the way early: I was wrong about Douglas Murray's hit on Johan Franzen.

April in the D is almost over; but hopefully that does not mean Johan Franzen is done playing.