For the second consecutive game, the Red Wings allowed three third-period goals by the Ducks. On Saturday night, however, there was no overtime hero as Detroit dropped a 4-0 decision to Anaheim.

The Ducks broke a scoreless tie late in the second period on a power play brought on by a controversial Justin Abdelkader hit. With 4:49 remaining in the period, Abdelkader left his feet and hit the head of Anaheim defender Toni Lydman. Replays were inconclusive as to whether he left his feet during the hit or before and whether or not Lydman’s head was the initial point of contact. Further complicating matters, Abdelkader was given a five minute major and ejected for charging, when he had actually stopped skating leading into the hit.

Just 13 seconds into the five-minute power play. Nick Bonino swatted a loose puck at the top of the crease past Detroit goalie Jimmy Howard on a goal-mouth scramble to make it 1-0.

Ryan Getzlaf made it 2-0 at 6:33 of the third, capitalizing on a Damien Brunner turnover in the Detroit zone to skate around a poke-check from Howard and put the puck into the empty net for a shorthanded goal.

Teemu Selanne fed Emerson Etem with a backhand pass from behind the net just 1:31 later, with Etem wristing a chance past Howard to put the Ducks up by three.

With 6:26 remaining, Matt Beleskey rounded out the scoring on an Anaheim power play. Beleskey was left uncovered in the low slot to tip a pass from Saku Koivu in behind Howard.

The Ducks finished the night with two power play goals on six tries while the Red Wings could not score in the same number of attempts with the man-advantage.

Howard made 25 saves on 29 shots. Anaheim goalie Jonas Hiller stopped all 23 shots he faced to earn the shutout.

Game Four will be on Monday in Detroit, with the Ducks leading the series 2-1.

Brian Lashoff made his first appearance of the playoffs for the Red Wings, swapping in for the injured Danny DeKeyser. Mikael Samuelsson also entered the Detroit lineup, replacing Todd Bertuzzi on the fourth line.

Red Wings Down Ducks in OT After Third-Period Collapse

A pair of goals in the first two minutes of the third period put the Detroit Red Wings in a hole Friday night and they were unable to recover, dropping a 5-2 decision to the visiting Anaheim Ducks. 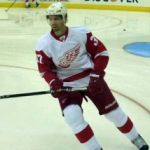 The Detroit Red Wings were unable to pull out a third overtime win of their Western Conference Quarterfinal matchup with the Anaheim Ducks on Wednesday, dropping a 3-2 decision.