Couture and Marleau each beat Detroit netminder Jimmy Howard five-hole in the tiebreaker. Howard narrowly prevented a Joe Pavelski chance that rang off the post from bouncing off his back and in, stopping it on the goal line. San Jose goalie Antti Niemi made toe stops on both Damien Brunner and Gustav Nyquist to give his team a chance to close things out.

The Sharks had opened the game’s scoring just 2:35 in with a shorthanded two-on-one. Pavelski picked off a pass intended for Brunner in the San Jose zone and carried it out alongside Marleau, with only Niklas Kronwall back. Kronwall couldn’t cut off Pavelski’s pass to Marleau for a wrister from the right faceoff circle past Howard.

Justin Abdelkader tied things up at 9:51 of the second period, banging the puck past Niemi from the side of the net off a feed from Johan Franzen.

Detroit took the lead at 2:29 of the third when Zetterberg in the right circle found Jakub Kindl wide open in the slot on the power play. Kindl’s wrister hit the open side of the net to make it 2-1.

Just 1:41 later, Couture tied it back up with a power play goal, gathering up the rebound of a Joe Thornton shot and lifting a backhander over Howard’s outstretched glove.

Howard finished the night with 28 saves on 30 shots while Niemi stopped 27 of 29 chances.

Each team had a power play goal on four tries with the extra attacker.

The Red Wings are back in action on Friday when they visit the Chicago Blackhawks. 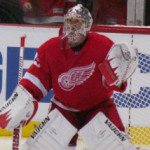 Detroit's Jimmy Howard and San Jose's Antti Niemi each earned a shutout on Monday night but the Sharks came away with the win, as Logan Couture scored the only goal of the shootout for a 1-0 win over the Red Wings.