In their only move on the day of the National Hockey League’s trade deadline, the Detroit Red Wings announced on Wednesday the signing of goaltender Jared Coreau to an entry-level contract.

He spent three years with the Wildcats, compiling a 32-31-8 record.

Coreau had attended rookie camps with the San Jose Sharks, New York Rangers, Calgary Flames and Edmonton Oilers after his first two seasons with NMU. In addition to the Red Wings, the Winnipeg Jets and Chicago Blackhawks were said to have interest in the 6’5″ netminder following his team’s loss to Michigan in the opening round of the CCHA tournament.

With the addition of Coreau, the crease is crowded across the Red Wings organization. Jimmy Howard has the starter’s role with the Red Wings, backed up by Jonas Gustavsson. Rookie Petr Mrazek has taken over as starter for the AHL’s Grand Rapids Griffins with Tom McCollum as his backup. Jordan Pearce is with the ECHL’s Toledo Walleye. Changes could come quickly this summer, however, as Howard, McCollum and Pearce are all scheduled to become free agents. Pearce, in particular, is expected to leave hockey to pursue a career in medicine.

In signing with Detroit, Coreau forgoes his final year of NCAA eligibility.

The long-rumored signing is Detroit’s second of an NCAA player in the last week, as the team agreed to terms with Western Michigan University defenseman Danny DeKeyser on Friday.

While the hockey media buzzes over the possibility of Vancouver Canucks goalie Roberto Luongo being traded, one of the more forgotten stories of the NHL's return is the to-be-determined fate of Detroit Red Wings netminder Joey MacDonald. 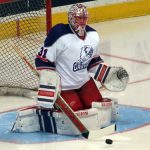