One thing that’s really sticking with me about the reaction to the NHL’s proposed realignment for the 2013-14 season is the insistence on thinking of it in terms of the existing alignment.

If you give the conferences non-geographical names, it’s not as awkward for the Montreal Canadiens to share a conference with the Florida Panthers. After all, is the distance really that much worse than the Los Angeles Kings and Edmonton Oilers? It only looks bad because Montreal belongs in an uber-Northeast Division, while the Panthers and the Tampa Bay Lightning clearly do not. Call that the Adams Conference and some of the dissonance goes away.

As I said via Twitter after the news broke, I don’t like that the only reason the Florida teams are in the uber-Northeast is because the current Atlantic Division was treated as sacred. Can’t break up the NYI/NYR/NJ triumvirate, can’t break up the Pennsylvania teams, can’t really even break up Philadelphia and New Jersey. Now all five teams are tied together, which means that any realignment starts with the Atlantic Division and how to not break it up.

I understand this, because I look at plans that say the Red Wings should have to span three time zones just to keep their rivalry with Chicago and I see what being told what your team wants doesn’t matter looks like. That said, I also look at Toronto Maple Leafs bolting the Central Division early in 1998 and wonder why the Atlantic Division is any more sacred than a division centered around Chicago/Detroit/Toronto.

If the league were to attempt to keep some semblance of a Southeast Division while keeping the Atlantic Five intact, it’s possible but not pretty. Here’s my take on it: 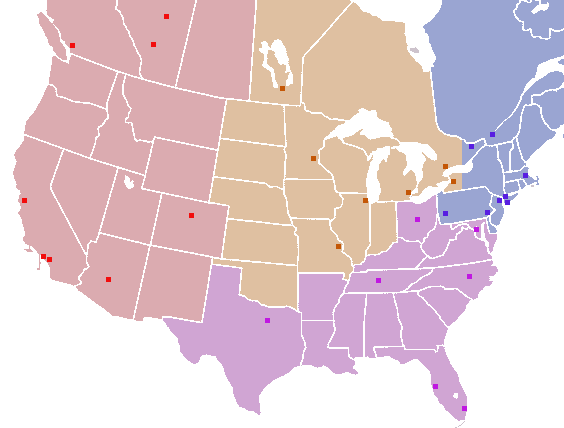 Yeah, the Southeast could have St. Louis instead of Columbus. The Atlantic could have Buffalo instead of Ottawa. Colorado could be in the Central. However you shake it out, there could be four conferences with the Atlantic Five kept together and the Florida teams in a conference of contiguous states.

Doing that, however, would leave you with three conferences that span multiple time zones and would break up Toronto and Montreal. It would get the Chicago/Detroit/Toronto conference back, however.

Actually, as much as I like the proposed realignment, I kind of like this one a lot, too.

One benefit of the above proposal is that it helps with the Quebec problem.

In the NHL’s plan, the uber-Northeast is an eight-team conference. It’s also the only conference Quebec could reasonably go into. That means that if the league ever adds Quebec, realignment becomes an issue again.

In the above proposal, Ottawa (or Buffalo, if you swapped them) could slide into the neo-Central to open up a spot for Quebec. Colorado being able to fit in either the neo-Central or the pseudo-Pacific helps give flexibility, too.

In the league’s proposal, it looks like the best option would be for the Red Wings to slide back into the neo-Central, leaving them back where they started. Another (even uglier) option might be to swap the Florida teams into the neo-Central and push Colorado back to the pseudo-Pacific.

One last thought: I have to think that NBC is absolutely salivating about the possibility of a Stanley Cup Final played entirely in the Eastern Time Zone. We don’t know the exact playoff format yet but the opening two rounds are expected to be intra-conference. If the conference champions are then seeded in the Stanley Cup Semifinals based on regular season finish, it’d be possible for the winners of the uber-Northeast and the Atlantic+ to meet in the Finals. Of course, the flip side is also true, as a Finals with no Eastern Time Zone team would be possible.

The National Hockey League Board of Governors approved a realignment plan that would see the Detroit Red Wings move to the Eastern Conference on Thursday.

The NHL's new realignment plan was rolled out tonight on Hockey Night in Canada's Satellite Hotstove. It looks a lot like last year's failed plan, with a few key changes. 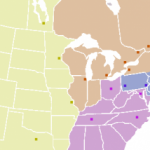