Alright, having had time to relax (and take care of all the errands I should have been running during the game – thanks afternoon hockey), it’s time to take a quick look at the Wings’ 3-2 win over the Kings today.

Make no mistake, Jonathan Ericsson may have scored the game-winner but Jimmy Howard was the hero today. This is a game that, especially after the second period, the Red Wings had no right being in. If you’re outshot 23-9 in a single period and don’t allow a goal, that’s your goalie, not any kind of team defense.

And Howard finished the weekend with 68 saves on 71 shots in 25 hours. Damned impressive.

Also impressive, getting back to it, was Jonathan Ericsson’s goal and a handful of plays leading up to it. It would have been very easy to ride out the rest of the period and head to overtime. Great job to stay alive, gain the zone, and create pressure. And a hell of a shot by Ericsson.

From a highlight perspective, who doesn’t love those shots that just trickle through and seem to take forever to get across the goal line? Video editors salivating over that goal, I’m sure. Much line the Griffins’ video guys having fun with Brendan Smith‘s shootout goal in the Red & White Game. I may have been thinking about video editing a bit lately.

I spent a lot of time complaining during the game about the NBC announcers. I’ve got no patience for Eddie Olczyk and his double standard p*sses me off. It’s one thing to point out a missed call, it’s another to point out all the ones missed on a specific team, say that they always get away with interference, and remain silent when the exact same play is made by the other team. That said, I think the game was pretty evenly called. Just important to point out the difference in complaining about the announcer’s comments on penalties and complaining about the penalties themselves. Which is stupid, because I don’t get paid to comment on anything so I should be the one who gets to say whatever the hell he wants, not Olczyk.

Three consecutive wins in four days really turns things around for the Wings. They’re now 7-4-1 and sit fifth in the Western Conference. Maybe they’ve turned a corner? We’ll see. Big matchup with the Blues on Wednesday after a couple days rest.

I spent more time during this game complaining about Olczyk on Twitter than I did talking about the game itself. That should tell you something about how entertaining the game was.

I think after two periods tonight you had to have the feeling that the floodgates were about to open one way or the other. Unfortunately for the Red Wings, it was not in their favor. 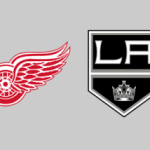