Todd Bertuzzi returned from the flu for his first game of the season Friday night, scoring twice in leading the Detroit Red Wings to a 5-3 win over the visiting Minnesota Wild.

All five Detroit goals came from the Red Wings’ top two lines after those units had only scored twice in the previous three games.

After a scoreless first period, Damien Brunner got Detroit on the board just 13 seconds into the middle frame. With the Red Wings on a carry-over power play, Brunner took a pass on the right wing from Henrik Zetterberg at the Minnesota blue line and raced to the right faceoff dot, snapping a shot over Wild netminder Josh Harding‘s shoulder into the far top corner of the net.

Bertuzzi’s first of the night made it 2-0 just 42 seconds later when Valtteri Filppula‘s backhanded bouncing chance from the slot deflected off Bertuzzi’s leg and past Harding.

Zach Parise cut Detroit’s lead to a goal with the Wild on a two-man advantage at 2:49. The rebound of a Mikko Koivu shot came out to Ryan Suter in the high slot. Suter sent it down to Parise in the right faceoff circle for a shot over the still-sprawling Jimmy Howard.

At 6:29 of the period, Minnesota’s Tom Gilbert tied things back up, snapping a shot from the high slot through a screen and past Howard just as a power play expired.

Zetterberg put the Wings back up with 7:05 left in the second. Datsyuk fed Zetterberg with a long backhand pass to the left faceoff circle. Zetterberg outwaited Harding, dropping almost to the goal line before putting a shot towards the net. The puck went past Harding’s glove, off the post, off a retreating Mikael Granlund, and into the net to make it 3-2.

With 2:36 remaining, Datsyuk restored the two-goal lead, snapping a shot from the top of the left faceoff circle through a Johan Franzen screen and past Harding on a Detroit power play.

Datsyuk fed Bertuzzi for the Red Wings’ final goal at 4:18 of the third period, sending a saucer pass from the left circle over two defenders and onto Bertuzzi’s stick in the right circle to bang off of Harding and into the net.

Parise’s second of the game closed out the scoring with 9:42 remaining when his attempted pass from behind the net deflected off of Zetterberg at the post and in behind Howard.

Howard finished the night with 23 saves on 26 shots against while Harding made 22 saves on 27 shots.

The Wings are next in action on Sunday when they visit the Chicago Blackhawks.

Bertuzzi, Darren Helm and Jakub Kindl all returned from various injuries to make their first appearances of the season… Kindl replaced Ian White on the blue line after he suffered a deep cut abobe his knee against Dallas on Tuesday… Patrick Eaves was a healthy scratch up front… Aside from White, the Red Wings were also missing Jan Mursak, Mikael Samuelsson, Carlo Colaiacovo, Jonathan Ericsson, and Jonas Gustavsson to injury… Thomas McCollum backed up Howard in place of Gustavsson.

Valteri Filppula got the Red Wings on the board early and they never let up, as Detroit cruised to a 6-0 win over the visiting Minnesota Wild on Friday night. 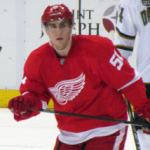