Long past are the days of the Yzerman Era in Detroit. No longer does Steve Yzerman suit up in a winged wheel; rather now he puts on a suit and is developing the Tampa Bay Lightning.

No longer does Nicklas Lidstrom patrol the blue line in Detroit, leading the Red Wings by example of the greatest defenseman to ever play the game.

Past are the days of Hasek, Osgood and Vernon defending the net (and fighting with Roy).

The Grind Line has retired, Shannahan now makes videos and explains why things he use to do are now illegal.

Lidstrom and his family moved back to Sweden over the summer and Fedorov is a GM in Russia.

The Yzerman/Lidstrom Era is over.

Dawning upon us now is the new era of the Red Wings. Gone may be the days of Yzerman and Lidstrom lacing up the skates and doning a Winged Wheel; but before us now is the awakening of something new.

This New Era has yet to crest over the horizon but the beacon is there.

Today the Red Wings will have their Red vs White game and the worst kept secret is history will become truth as Henrik Zetterberg will be announced as the new leader of the historic franchise.

Zetterberg will bring with him everything he’s learned since showing up to find his first locker next to Yzerman, he’s taken a similar path through the NHL becoming the second Swedish Conn Smythe winner only Lidstrom before him. Zetterberg will be more vocal than the previous two captaincy’s that span many Wings fans entire life.

One thing that will stay the same is that though Zetterberg is the captain leadership does not end with him. Pavel Datsyuk and Niklas Kronwall (and possibly another… my guessValtteri Fippula) will wear the A and everyone from Ownership down to the prospects still fighting their way though development to one day skate for the greatest sports franchise.

With this New Era fast approching now that the lockout has ended it is improtant to remember where we has an Original Six fan base have come from. The trouble times as much as the dynasty moments all are part of this team. Now is a transition, now is the time to still be as snarky and demanding of our team, to hold the players to the same standards as the back-to-back cup runs and the parades down Woodward. Now is a time to not sit back and worry about what is to come; it is a time to get in, get excited. For the first time in many Wings fans lives the team is new.

A short season leaves everything in the league up for grabs. Players around the league are not ready, Henrik Lundqvist from the Rangers has even admitted he is not ready. Injuries will be plenty, call ups will be frequent.

The lockout is over and the Zetterberg Era has begun. 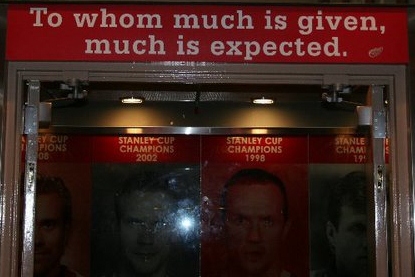 And so it begins…

Henrik Zetterberg factored in all but one of Detroit's goals Tuesday night, notching four points as the Red Wings picked up a 5-3 win over the San Jose Sharks to open a three-game West Coast road trip.