It seems ridiculous to revisit a series of posts that I only wrapped up two and a half weeks ago but I think it’s valid when one of the assumtpions I had based all of my work on is being questioned.

I published a handful of jersey concepts that looked at what the Red Wings might wear in the 2013 Winter Classic, taking into consideration current trends and the team’s history. Five of the six were based on the assumption that Detroit, as the home team, would wear red.

Last weekend, Howard Berger tweeted that the Red Wings would be wearing a cream-colored jersey for the Winter Classic, which jibed with the earlier assertion that the Maple Leafs would wear blue.

Berger credits his source as the same person who let the Leafs’ alternate jerseys leak last season, so there’s some history to him breaking this kind of news.

I will say that if the Wings are wearing “cream” or “vintage white” at Michigan Stadium, I’ll be disappointed. I think you only have to look at the 2004 Eastern Conference All-Star jersey to see that an off-white jersey just looks dirty. Vintage white can be used well as an accent but it doesn’t work as the primary color.

That said, I think it’s still worth looking at what Detroit could wear on January 1 with this new information in mind.

I don’t think the throwbacks worn in 1991-92 or the 2009 Winter Classic jersey will make an appearance because the team will want to introduce something they haven’t already thrown back to (even if this version would use vintage white rather than actual white). As such, I think there are two options left on the table. 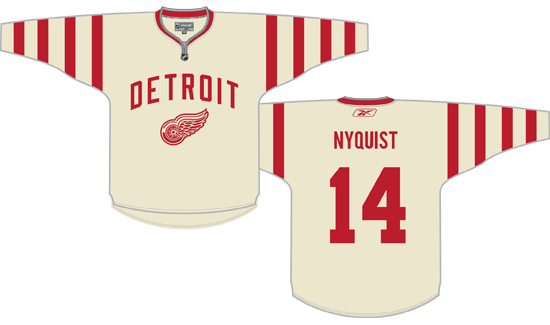 This is a color-flipped version of my initial concept from last February, based on the 1928-29 sweaters of the Detroit Cougars. I think this design is still possible because it’s something the team has never thrown back to. As I originally stated, it’s different enough from their current design and each of their throwbacks that it makes for a solid merchandising opportunity. 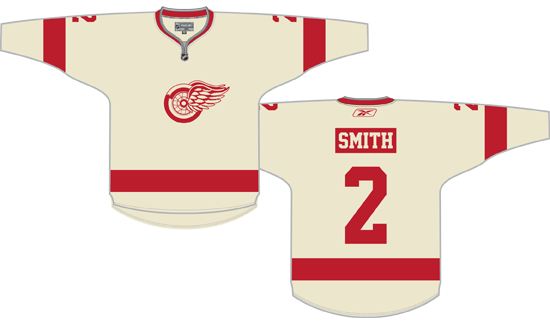 Alternately, we could see the team go with a more familiar look. As I said when I introduced my fourth and fifth concepts, there are a lot of fans calling for the Winged Wheel to appear on the Winter Classic jersey. It would be very easy to do something based on Detroit’s 1934 sweater, only with a vintage white update.

As with my previous concepts, I have no advance knowledge of what the Red Wings or Maple Leafs will be wearing in the Winter Classic. I also know my template is not perfect (Reebok vector instead of wordmark, incorrect collar, etc.). 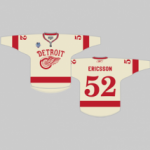