It’s a slow news month in the Red Wings world, so the news that the Wings had indeed been talking to the Calgary Flames about trading for Jay Bouwmeester is a big deal.

With only six NHL defensemen on the roster, Bouwmeester would provide some much-needed added depth.  Once a young star, his stock has dropped since joining the Flames from the Florida Panthers in 2009.

It’s hard to argue against Detroit picking up a defenseman.  Depending on the cost, I’m not sure I’d complain about trading for Bouwmeester.

That said, I do wonder why Bouwmeester’s $6.68 million cap hit over two seasons would be deemed acceptable for a reclaimation project while $7 million over one season was too much to risk on Alexander Semin.

Is it simply because the Red Wings need a defenseman more than they need a forward?  Maybe, though I’m not sure how much I agree with that.

It’s doubtful that general manager Ken Holland would make a move before the new CBA is put together, so don’t expect a resolution to this any time soon. 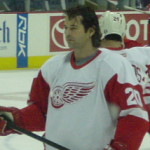 It's been known since before the 2013-14 season was even over that the Red Wings would be looking to upgrade their defense this summer and their best opportunity to do some comes tomorrow as free agents become eligible to sign contracts with new teams at noon.