Blashill replaces Curt Fraser, who left the Griffins after four seasons to take an assistant coaching spot with the Dallas Stars.

The Griffins will be Blashill’s fourth team in as many seasons.  He was the head coach of the USHL’s Indiana Ice from 2008-10 before jumping to Western Michigan University to become their head coach for the 2010-11 season.  The Red Wings brought him on as an assistant last season.

“We’re very excited to name Jeff the next head coach of the Griffins,” said Detroit general manager Ken Holland in a statement.  “He’s a talented coach that has a proven track record of working well with young players.  He did a tremendous job for us in Detroit last season and we look forward to having him groom and mentor our prospects in Grand Rapids.  We would also like to thank Curt Fraser for his four years of service behind the Griffins’ bench.  He did an outstanding job for us.  We wish Curt and his family nothing but the best in Dallas.”

“I’m thrilled for the opportunity to be the head coach of the Griffins,” Blashill added.  “I had a tremendous experience in Detroit last season and will lean on that experience as I make the transition behind the bench in Grand Rapids.  I worked with most of our young players at training camp and in the preseason last year. We have some great talent in the organization.  I’m looking forward to getting started.” 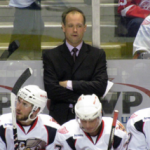 The Detroit Red Wings made it official on Tuesday, naming Jeff Blashill as the 27th head coach in team history.