It’s hard to believe that it’s been fifteen years since the infamous “Brawl in Hockeytown” that inspired the Red Wings to make their 1997 Stanley Cup run and really kick-started what was briefly the NHL’s fiercest rivalry.

It’s kind of funny that the game is so celebrated, as removed from the emotion of it all, it really was a dirty affair. Darren McCarty jumping Claude Lemieux, Brendan Shanahan and Mike Vernon teaming up on Patrick Roy and Adam Foote. In today’s NHL, I have to think we would have seen suspensions galore.

But at the time, it was a kind of catharsis. Until then, the league knew that the Wings were a soft team that wouldn’t stand up for themselves. The league’s two-game suspension to Claude Lemieux for breaking Kris Draper‘s face in the 1996 playoffs was light and there was almost an unspoken mandate that if the Red Wings didn’t like it, they’d have to do something about it themselves.

That they did, with McCarty playing the hero with his fists and his stick.

Fifteen years removed, I won’t say it was good hockey but it was what the Red Wings needed and it’s still fun to go back and re-watch.

How Sean Burke was able to single-handedly stop the Wings, I may never understand. Well, he didn't really do it all by himself. The refs helped a lot by taking Pat Verbeek out of his face, even though Burke's stick was in Verbeek's face. Understandably, Beeker's not quite happy about the officiating and he rants about it a little in the Free Press, which also has coverage of last night's tie. 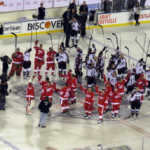 If you were following DetroitHockey.Net on Twitter during the Red Wings - Avalanche alumni game at Coors Field (before my phone battery died on me), you could probably see the narrative I found most interesting about the event. It's something I commented on when the ticket sale for this game was announced and when the rumor that the Red Wings might be visiting the Toronto Maple Leafs for an outdoor game last year broke.