It wouldn’t be hard to argue that the center of the NHL universe is Toronto, but it appears that St. Louis might have some evidence to back up a claim to that title.

Out of curiousity, I mapped out this history of what I’m calling the weighted geographic center of the NHL. I’m not a geographer, I don’t know if there’s a better term for this or not. It’s the average of the longitude and latitude of each NHL host city.It turns out that for the last 15 years or so, the weighted geographic center of the NHL has bounced around various points between St. Louis and the Quad Cities. 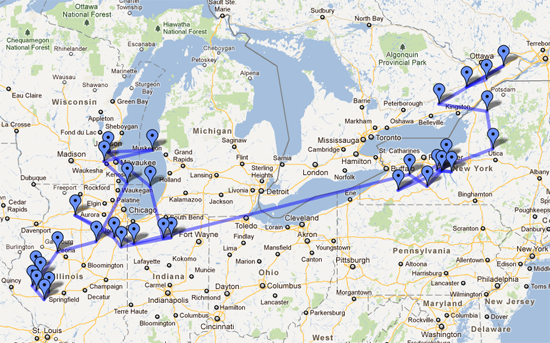 The furthest north and east it’s ever been were the same year, 1919, when the league consisted of Montreal, Ottawa, Quebec and Toronto.

The center of the NHL has been in the United States since the first American team joined the league, when the Boston Bruins and Montreal Maroons were added in 1924.

It bounced around Western New York for 15 years until settling east of Buffalo for the Original Six era. The 1967 Great Expansion saw it jump to south of Gary, Indiana.

There are no insightful conclusions to draw from this or anything, it’s just something I was interested in and figured I’d share.

I’ll admit that my method for calculating this is a little flawed. I used the Google Maps API to find the longitude and latitude of each NHL city. “NHL city” is defined by the city a team’s arena is in, except for the fact that I counted the 1926-27 Detroit Cougars as being in Detroit rather than Windsor and the entire history of the Minnesota North Stars was attributed to Minneapolis rather than Bloomington. Additionally, the Phoenix Coyotes’ move to Glendale and the New Jersey Devils move from East Rutherford to Newark weren’t accounted for until 2011, when the Atlanta Thrashers relocated to Winnipeg. Quite honestly, this wasn’t expected to be scientific so I just didn’t bother to fix those mistakes.

Well, that was high-scoring. The North American All-Stars took out the World All-Stars with a 14-12 win in Denver today. I'm really starting to hate how offense-intensive the All-Star Game is, but it's still cool to watch. The thing to really hate is this stupid North America vs. the World format that's somehow lasted for four years. I say bring back East vs. West so I can know who to cheer for, but who cares what I say? Rob Blake did not wind up wearing the winged-wheel on his shoulder during the game, but rumors about his destination continue. I only hope the Wings won't give up too much (*cough* Marty Lapointe) for him.

NHL to Portland? Domain Registrations Hint at It

A number of internet domains registered by the Portland Winterhawks organization seem to show an interest in bringing the NHL to Oregon. 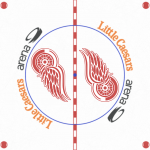 My thoughts on what the Red Wings' new center ice design should be.