No formal recap for this one, it’s too late, so let’s just get to my thoughts on the Wings’ loss in San Jose.

The game-winning goal… I want to complain on the basis of weaker calls having gone against Detroit, but a lot of that goal falls on Justin Abdelkader. If he doesn’t push Braun, maybe the goalie interference call gets made. If he doesn’t follow through like an idiot, he’s not laying on top of Jimmy Howard himself as the goal is being scored. Just a bad play to cap a game full of them.

Speaking of bad plays, was there a time when Brad Stuart was on the ice tonight and didn’t screw something up? We know he wants to bolt for California this summer but he seriously was playing like he’s already a Shark again. Awful, awful night for him.

That said, there were a handful of plays where players just fell down or the puck bounced funny. Bad ice? I don’t know, didn’t seem like the Sharks were having as much of a problem.

So on top of the loss, we’ve got an injury to Darren Helm. From @AnsarKhanMLive…

Helm walks out of room limping. Says he is in pain. Will have MRI on Monday. Doesn’t know extent of injury 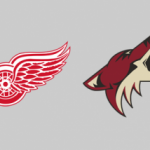 I didn't see most of this game so I'm not going to say too much about it. Knowing the outcome, I'm not going back and watching it. Instead, my thoughts based on the reaction I'm seeing from elsewhere...