Well, by my count the Red Wings are now 3-9 in their twelve total Saturday games in Nashville on no rest. Someone let me know if FSD uses that number, too.

I want to complain about this one ’cause it feels like the Wings were close enough to make something happen tonight, but really there wasn’t any one thing.

I don’t like how Kyle Quincey played the two-on-one that turned into Nashville’s opening goal but Drew Miller responded almost immediately so it doesn’t really matter. I don’t like the interference penalty on Brad Stuart that gave the Predators the power play on which they scored the GWG, but Ian White really needed to cut off that pass whether the team was shorthanded or not.

A couple miscues, a couple goals against. That’s why you can’t make mistakes against a team like the Predators. They’re too efficient to give chances like that.

In the offensive end, the Wings blew their chances. The power play was better than it’s been in awhile but until they get a goal with the extra man, those are just missed opportunities.

Filppula with the puck at the side of the net in the closing minute? Gotta get that up and in. Hard to knock how he’s been playing, though, especially since he hasn’t been the guy called on for those clutch goals before.

Joey MacDonald? Stupid college chants be damned, he kept the Wings in it.

So lots of good things tonight, just not the outcome, which hurts worse ’cause the Blues are going to get their points against Columbus and extend the division lead.

Compare Wednesday's game against Vancouver and tonight's matchup vs. Nashville and it'd be tough to believe they featured the same Red Wings team. 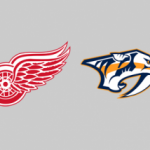 I didn't see any of Nashville's comeback so I don't have much to say about this game. And I'm exhausted from a brutal but insanely fun soccer game so I'll make this quick.

I wasn't near a computer at all tonight but I saw the whole game, so I'll be going from memory for my postgame notes since I didn't write anything during the game.