The Detroit Red Wings announced on Monday that they’ve called up a trio of players from the American Hockey League’s Grand Rapids Griffins.

Goaltender Jordan Pearce, defenseman Doug Janik and forward Chris Conner are all expected to dress when the Red Wings visit the Philadelphia Flyers on Tuesday.

Pearce will back up Joey MacDonald, as Jimmy Howard will miss the game with an unspecified lower-body injury suffered during Sunday’s 2-1 loss to the Chicago Blackhawks. Howard left that game after the first period, with the score tied 1-1.

Janik will swap in for Jakub Kindl, who also left Sunday’s game early.

Conner will replace Todd Bertuzzi, who’s been playing through a groin injury. 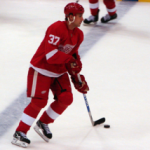 Conner Out with Hand Injury, Tatar Called Up

The Detroit Red Wings lost in Philadelphia Tuesday night, running their winless streak there to seven games with a 3-2 loss to the Flyers.