The Detroit Red Wings stretched their franchise-record home winning streak to eighteen games Wednesday night with a 4-2 victory over the Edmonton Oilers.

It was the first game of the streak not won by goaltender Jimmy Howard, who’s out of the lineup with a broken index finger. Joey MacDonald earned the victory in net for the Red Wings, stopping 15 of the 17 shots he faced.

The Red Wings needed a third-period charge to finish off the Oilers. After Detroit took a 2-0 lead, Edmonton rallied before the Wings scored twice more to finish things off.

Johan Franzen opened the game’s scoring with 6:42 left in the first period with a rare power play goal. Ian White fired a shot from the middle of the ice, just inside the blue line. Franzen tipped it at the top of the crease, redirecting it past Edmonton goalie Nikolai Khabibulin.

Cory Emmerton made it 2-0 at 2:45 of the second period, driving to the net to lift a backhander past Khabibulin when the rebound of a Justin Abdelkader chance squirted free.

Sam Gagner continued his torrid scoring pace for the Oilers, getting them on the board with 8:52 left in the middle period. With Jakub Kindl heading to the bench to be replaced by White and Jonathan Ericsson trying to fight Edmonton’s Ben Eager, Gagner was left all alone to take an outlet pass and break in on MacDonald, faking around his poke-check to score his seventh goal in four games.

Gagner tied things up on an Oiler power play at 8:23 of the third, putting the rebound of a Magnus Paajarvi chance past MacDonald.

The Red Wings would regain the lead 2:23 later. Justin Abdelkader’s chance from the left circle slipped through Khabibulin’s pads and came to a stop in the crease. Drew Miller drove to the net and found it before anyone else could, knocking it in to make it 3-2.

Henrik Zetterberg wrapped up the game’s scoring with 5:16 remaining, snapping a shot from down low in the left circle over Khabibulin’s blocker.

Khabibulin finished the night with 26 saves on 30 shots against.

Each team scored once on the power play. The Oilers had seven tries with the extra attacker, including 1:14 of five-on-three in the first period. Detroit had four power play tries.

The Red Wings continue their six-game homestand on Friday when they host the Anaheim Ducks.

Detroit forward Danny Cleary left the game after the second period. The team announced after the game that he will have his knee drained and is expected to miss up to a week… Jan Mursak and Mike Commodore were the healthy scratches for the Red Wings. 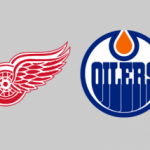 After the Oilers got their first goal tonight, I was a little worried it was all downhill from there. It was such a mess of a goal, I could see it deflating the Red Wings and leading to a loss.

The Detroit Red Wings' winning streak ended at seven games Thursday night with a 4-3 shootout loss to the Edmonton Oilers. 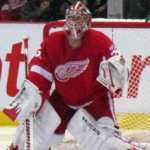