Todd Bertuzzi scored with 39 seconds remaining in overtime on Saturday afternoon, lifting the Detroit Red Wings to a 3-2 win over the visiting Chicago Blackhawks.

Bertuzzi banged the rebound of a Valtteri Filppula chance past Chicago netminder Corey Crawford from the slot to give the Red Wings the win. It was his second goal of the afternoon.

Tomas Holmstrom had opened the game’s scoring with 7:04 remaining in the first period, tipping an Ian White shot from the high slot past Crawford on a power play.

Bertuzzi’s first of the game extended Detroit’s lead with 3:50 left in the period, as he beat Crawford with a backhand shot on a breakaway.

The Red Wings outshot the Blackhawks 21-4 in the opening frame but only carried the 2-0 lead into intermission.

Chicago would halve that lead with 5:06 left in the second. Detroit netminder Jimmy Howard went behind the net to play the puck but it took a funny bounce and deflected off the heel of his stick to the side of the net, where Andrew Shaw jumped on it and put it into the open net.

The Blackhawks dominated the third period in an effort to get even They took the first eleven shots of the period and outshot Detroit 16-5 but needed until the game’s final minute to tie things up.

With 52 seconds left, former Red Wing Marian Hossa fired a shot from the blue line that deflected off of Wings’ defenseman Niklas Lidstrom and Chicago forward Jonathan Toews to get past Howard, knotting the game at two.

The Red Wings seeminly flipped a switch in the overtime, outshooting Chicago 9-0 before Bertuzzi’s game-winner.

Howard finished the afternoon with 25 saves on 27 shots against. Crawford made 40 stops on 43 shots.

Holmstrom’s power play goal was the only goal scored with the man-advantage on Detroit’s only chance with the extra attacker. The Blackhawks were scoreless on three power plays.

The Red Wings look to extend their home winning streak on Monday when they host the Buffalo Sabres.

Bertuzzi was a late addition to the Red Wings’ lineup, having recovered from the injury that kept him out of Detroit’s win over Phoenix on Thursday. Jam Mursak was a healthy scratch to make room for him. Injured defenseman Mike Commodore was the other Detroit scratch… The game was the 700th of head coach Mike Babcock‘s career.

The Detroit Red Wings had a one-goal lead twice Friday night but the Chicago Blackhawks bounced back each time en route to a 3-2 win over their Original Six rivals.

Marian Hossa scored the game-winning goal in overtime Monday night, lifting the Chicago Blackhawks to a 3-2 win over the Detroit Red Wings. 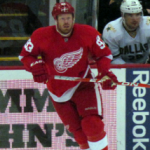 The Detroit Red Wings scored three times in the third period Saturday night, breaking a 2-2 tie to earn a 5-3 win over the visiting Dallas Stars.