Leading up to and immediately following the 2012 Winter Classic, there’s been a lot of buzz that the Red Wings are next in line to host the event.

Today, University of Michigan athletic director Dave Brandon confirmed that the league has been in contact with him about using Michigan Stadium as the 2013 Winter Classic venue.

There’s a lot of politics involved here, as Wings’ owner Mike Ilitch reportedly wants to host the event at Ilitch-controlled Comerica Park. The NHL, meanwhile, wants the attendance record that could be reached at Michigan Stadium. Add in the issue of liquor sales at the Big House and there are still a lot of things to sort out.

Personally, I’m torn. I was not a fan (though I know I’m in the minority) of the Big Chill at the Big House so I have concerns about another outdoor game there. A game at Comerica Park, though, would be harder to get tickets for and I for damned sure want to be at this one.

Nothing is set in stone anywhere and it’s important to remember that, but it’ll be interesting to see how this plays out. 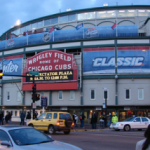