The Colorado Avalanche capitalized on turnovers to earn a 4-2 win over the Red Wings Sunday night, ending Detroit’s winning streak at seven games.

Colorado’s first and third goals came on plays that saw the Red Wings cough the puck up.

Detroit opened the scoring with 4:52 left in the first period. On a power play, Pavel Datsyuk drove to the net through the right faceoff circle and the puck bounced out to Johan Franzen in the left circle, wide open to knock the puck into the empty side of the net past netminder Semyon Varlamov.

Just 26 seconds into the middle frame, the Avs got on the board. Gabriel Landeskog pressured defenseman Ian White behind the Detroit goal and stole the puck, sending it out front to Ryan O’Reilly for a shot past goalie Ty Conklin.

The Avalanche added a power play goal at 2:11 of the period, with Paul Stastny putting a shot from the right circle into an empty net as Conklin got spun around in a goalmouth scramble and stuck out of position.

Danny Cleary evened things up for Detroit at 5:08 of the third period, deflecting a Henrik Zetterberg shot past Varlamov to make it 2-2.

Another turnover would bite the Wings, however. At 9:22 of the period and with Detroit on a power play Darren Helm and Drew Miller miscommunicated at center ice and T.J. Galiardi poked the puck to Landeskog on the left wing. Landeskog and Galiardi broke in two-on-one and defenseman Niklas Kronwall didn’t block the pass back across to Galiardi in the slot, where he rifled a shot past Conklin.

O’Reilly would add an empty net goal in the game’s final minute to round out the scoring.

Conklin finished the night with 31 saves on 34 shots against. Varlamov stopped 27 of Detroit’s 29 shots.

Both teams had a power play goal. The Red Wings had five tries with the extra attacker and Colorado had three.

The Wings will close out their three-game road trip in St. Louis on Wednesday.

Detroit forward Valtteri Filppula left the game in the first period with a cut on his leg and did not return. His status for Wednesday was not immediately known… Cory Emmerton and Mike Commodore were the healthy scratches for Detroit… Conklin made his first start in eighteen games. 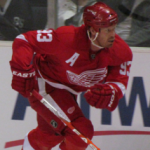 The Red Wings played approximately one period tonight and got the result you'd expect from that, a 4-2 loss to Colorado, ending their winning streak at seven games.

The Detroit Red Wings' winning streak ended at four games Saturday night as they dropped a 3-1 decision to the Nashville Predators. The win clinched Nashville's victory in the season series between the two teams.