What you end up with is a period that defined the scoreboard but not the game.

I’m not sure if Detroit got lazy after taking the 3-0 lead or Buffalo started playing better; probably a combination of the two. The latter you have to expect but the former is disappointing. The now-seven-game win streak the Wings are on has gotten them back to the top of the conference. It’s going to end someday but I’d hate to see that loss come because the Wings got sloppy.

Jimmy Howard is a fantastic goalie but the team can’t continue to ride him like they have at times during the streak.

One good bit of news to come out of the latter stages of the game is that Justin Abdelkader is fine after taking a high hit in the third period.

Also good: Chris Conner looked solid in his first game as a Red Wing. I have to think he’s officially ahead of Fabian Brunnstrom on the depth chart right now, but things are going to get interesting once Jan Mursak returns from injury.

It had to be exciting right down to the end, but the Red Wings moved to within a point of clinching a playoff spot tonight with their 4-2 win over the Buffalo Sabres.

The Detroit Red Wings scored three times in the first period and never looked back, cruising to a 4-1 win over the Buffalo Sabres Friday night. 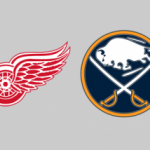 I managed to harp on the negatives even after a big OT win for Detroit over the Blackhawks on Saturday, so let's start there for tonight's win over the Sabres.