At least that one’s over. I’ll be quick with this.

Vokoun stopped the Wings early and it gave the Caps a chance to get into the game. This is an entirely different game if two key saves don’t happen in the first period.

Washington got on the board on a power play that didn’t need to happen. Todd Bertuzzi had no need throw that hit on an icing call.

The second Capitals goal came off a giveaway that never should have happened and bad goaltending. Ty Conklin can’t be faulted for every goal tonight, no matter how bad his numbers were, but he was way off the post on that second goal.

I haven’t even seen the third Caps goal yet and the lone Wings goal doesn’t matter, so we’re on to the fourth Caps goal. What a mess. Should’ve been an easy stop by Conklin but it trickles through and he doesn’t know. Caps pounce on the loose puck. Three more goals would be scored but the game was really done at that point.

Make no mistake, the story of the night for the Wings was Ty Conklin.

I've got a migraine coming on so the postgame notes will be quick... 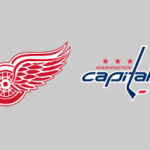 I'm going to stand by the following Twitter exchange from early in the first period: