Detroit goaltender Jimmy Howard stopped all 25 shots he faced Thursday night, leading the Red Wings to a 2-0 win over the visiting Vancouver Canucks.

The Red Wings have now kept their opponents scoreless in eight of the nine periods they’ve played. Howard allowed three goals in the third period on opening night against the Ottawa Senators, Ty Conklin blanked the Colorado Avalanche then next night, then Howard added his shutout of the Canucks.

Detroit’s offense came in a dominant second period that saw them outshoot Vancouver 24-8. There was not a single faceoff in the Red Wings’ zone that period, a sign of their control of the puck.

Justin Abdelkader opened the game’s scoring at 8:37 of the middle frame. Abdelkader took a cross-ice feed from Todd Bertuzzi on a rush as Pavel Datsyuk drove to the net, drawing the defense to him. Left open in the left faceoff circle, Abdelkader snapped a shot past Cory Schneider.

Valtteri Filppula made it 2-0 just 2:18 later, dishing the puck off to Johan Franzen and then getting it right back in the right circle to put a fluttering shot past Schneider’s glove.

Cody Hodgson appeared to get the Canucks on the board in the closing seconds of the middle frame. Hodgson fired a shot that Howard got only a piece of as it fluttered into the net. Replay showed that time had expired before the puck crossed the goal line, however.

Though the Red Wings picked up the win, they remained scoreless on the season on the power play. They had seven chances with the extra attacker while Vancouver had four.

Schneider finished the night with 35 saves on 37 shots.

Detroit will be back in action on Saturday when they visit the Minnesota Wild.

Abdelkader briefly fought Maxim Lapierre in the first period… Abdelkader had previously scored on Schneider in the 2007 Frozen Four, when his goal in the final minute gave Michigan State the NCAA Championship over Schneider’s Boston College… The Red Wings have scored ten goals on the season, each by a different player. 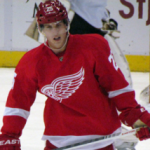 The Detroit Red Wings entered the final week of the NHL's regular season with a 2-1 shootout loss to the Vancouver Canucks on Saturday night.

Jimmy Howard made 21 saves Friday night, stopping every shot he faced as the Detroit Red Wings opened their season with a 4-0 win over the Anaheim Ducks.

The Detroit Red Wings moved back into playoff position Sunday night behind a shutout of the Nashville Predators by goaltender Jimmy Howard.