With Commodore off Detroit’s 23-man lineup, suspended defenseman Brendan Smith has been called up.

Smith will be inelegible to play but for every game the Wings play while he’s on the roster, one of his five suspension games will be burned off.

This was the strategy I’d suggested that the Red Wings would use in handling Smith’s suspension so the call up doesn’t surprise me. That said, Commodore going on IR so early in the season does, as we’d previously been told that the Wings play too few games to start the year to make it worth it. Maybe he’s more hurt than originally believed? 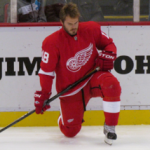 Defenseman Brendan Smith has been suspended for the remainder of the preseason and five regular season games after his hit to the head of Chicago's Ben Smith. According to the Freep's Helene St. James, he will be assigned to Grand Rapids, leaving his suspension to be served later.