Brunnstrom scored three goals in his first four preseason games while playing on a pro tryout contract. Combined with an injury to Jan Mursak, it was enough to earn a roster spot with the Red Wings.

As per team policy, financial terms of the deal were not announced. The contract is for one year and is a two-way deal.

As a bunch of people have picked up already today, Aftonbladet is reporting that the Red Wings are signing Fabian Brunnstrom to a try-out contract and bringing him to training camp.

The Detroit Red Wings have placed forward Fabian Brunnstrom on waivers, per a tweet from TSN's Bob McKenzie. 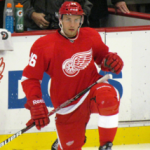