Tryout goalie Ramis Sadikov was the only player cut outright has he has no pro contract. Nick Oslund is also without a deal but was invited to the Grand Rapids Griffins’ training camp with the possibility of earning an AHL job.

Aside from Sadikov, all of the cut players will appear in tonight’s Red & White game in Grand Rapids. 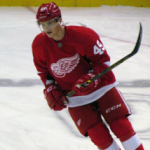