The Detroit Red Wings defeated the Toronto Maple Leafs 4-2 Saturday night but lost starting goaltender Jimmy Howard in the process, as he suffered a shoulder injury early in the third period.

With the Red Wings leading 2-1, Joffrey Lupul drove to the net and bumped Howard, then fell on top of him and swept the rebound of a Phil Kessel shot into the net. Howard could not continue after the play and was replaced between the pipes by Joey MacDonald.

Todd Bertuzzi rounded out the game’s scoring with an empty net goal in the final minute.

Henrik Zetterberg had opened the game’s scoring 5:05 in, swatting a backhand rebound chance under Reimer with the Red Wings on a power play.

Nazem Kadri made it 1-1 with 2:04 left in the first, snapping a shot from the right faceoff circle through a Darryl Boyce screen and past Howard on the short side.

Tomas Holmstrom gave the Red Wings a second lead at 9:17 of the second period, deflecting a Niklas Kronwall shot from the blue line past Reimer on another Detroit power play.

The Wings finished the night two-for-two with the man advantage while the Leafs were scoreless on four power play attempts.

Howard stopped 15 of 17 shots before his injury. MacDonald stoped all seven shots he faced in picking up the win while Reimer made 25 saves on 28 shots.

The win puts the Red Wings at 1-1-1 in their current five-game homestand. They next host the Chicago Blackhawks on Monday.

Detroit was without forwards Pavel Datsyuk and Johan Franzen due to injury. Ruslan Salei was a healthy scratch on defense… Red Wings general manager Ken Holland later said that Howard’s injury “doesn’t appear to be anything significant.” With normal backup goalie Chris Osgood on long-term IR recovering from a sports hernia, Detroit is expected to call up either Thomas McCollum or Jordan Pearce to back up MacDonald on Monday.

The Detroit Red Wings dropped a 2-1 shootout decision to the Toronto Maple Leafs on Wednesday night. 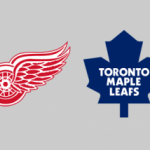