That’s the total amount raised for Children’s Hospital of Michigan by the H2H2 event. Red Wings fans (and hockey fans in general) are amazing.

I’m honored to have been able to be there. Many thanks go out to Jen MacRostie, Ellen Manuszak, Mike Serven, the guys from The Production Line, Cath Peters, and anyone else I’m forgetting who were so instrumental in organizing the event.

As for the event itself, the guys from Winging it in Motown (including Anne from Kansas) did a great job of helping me break out of my anti-social shell. I got the chance to talk to Chris Hollis a little. Also was able to spend some time with the always-sought-after George Malik and Monica McAlister.

At the game I had the good luck to sit next to Jeff Hancock of The Brendan Smithsonian Institution and with the TPL crew.

I’ve already mentioned my thoughts on the game itself. The celebration when Datsyuk scored to win it was pretty insane. Prior to that, of course the Red Wings would get a goal called back in a game where 150 actual tinfoil hats were in the arena.

Being older than my years, I called it quits after the game, with a minor adventure getting Monica back to her car.

Thanks again to everyone who made a fantastic night possible and apologies to anyone I didn’t mention. I can’t wait to do it again next year.

H2H2 is here so I'm kicking off today's gameday thread before heading down to Hockeytown Cafe for the pre-game party. 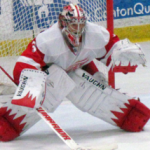 In the words of Bill Clement, "Well, where do you wanna start?" 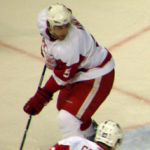 General notes from Wednesday about the Red Wings...