Pavel Datsyuk returned from injury Monday night and immediately made his presence felt, scoring a goal and adding an assist as the Detroit Red Wings defeated the New York Rangers, 3-2.

Datsyuk had missed 19 games after suffering a broken hand in Detroit’s 5-4 overtime win over the Vancouver Canucks on December 22.

After a scoreless first period, Datsyuk opened the game’s scoring at 2:52 of the second period. He knocked the puck away from Brian Boyle in the left corner and then went to the net, where he took a pass from Jiri Hudler. Datsyuk stuffed a shot into the pads of New York goalie Martin Biron but reached back to knock his own rebound home.

The Rangers replied at 3:09 of the third period. Wojtek Wolski sent a cross-ice pass to Matt Gilroy in the right faceoff circle and Gilroy put it back across to the far side of the goal for Derek Stepan to knock past Detroit netminder Jimmy Howard.

Hudler restored the Red Wings’ lead 1:55 later. He sent a between the legs pass to Pavel Datsyuk along the right wing boards and then cut to the goal. Datsyuk sent the puck to Jonathan Ericsson on the rush and Ericsson fed it back across to Hudler to rifle a shot over Biron into the top of the net.

With 5:23 left in regulation, Drew Miller made it 3-1. Justin Abdelkader fired a shot from the left faceoff circle on Biron and Miller knocked home the rebound.

Brandon Dubinsky scored with 4:05 left to pull the Rangers back within a goal, snapping a shot from the left faceoff circle past Howard on a two-on-one.

The Red Wings would hold on despite a late five-on-three for New York.

Neither team scored a power play goal on the night. Detroit had two tries with the extra attacker while the Rangers had five, including 44 seconds of five-on-three and a six-on-four with Biron on the bench to close out the game.

Howard stopped 45 of 47 shots in earning the win. Biron made 32 saves on 35 Detroit chances.

The Red Wings continue their stretch of five games in eight nights on Wednesday when they host the Nashville Predators.

Detroit lost forward Valtteri Filppula to a lower-body injury early in the third period. He did not return. 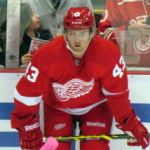 The Detroit Red Wings trailed 2-0 after the first period on Saturday night but scored two quick goals in the second and another in the third to complete a come-from-behind win over the New York Rangers.

Detroit goaltender Chris Osgood made his first appearance in net since a December 15 loss in Colorado, stopping 33 shots and two shootout attempts to lead the Red Wings to a 3-2 win over the Minnesota Wild.