As I said earlier, this is why you don’t go planning around possible milestones.

Midway through the third period you’ve got fans chanting “Ozzie, Ozzie” after routine saves. Signs celebrating the not-to-be win number 400 are in the crowd like Chris Osgood‘s milestone had already been reached. Then the team started playing like they believed it was.

Not surprisingly, they lost.

The shift leading up to Brenden Morrow‘s tying goal with 3:14 left in regulation was colossally bad. The puck could have been cleared several times, with each failed attempt worse than the previous one until finally Brian Rafalski put it right on Jamie Benn‘s stick. Benn put it to Morrow all alone in front of the goal and the puck ended up in the net.

Blame Osgood if you want. I see some already are. The third and fourth goals could have been stopped. Typical weak Osgood goals, they might say.

I say they those chances never should have happened. If it comes down to Osgood having to make a superb stop, something has already broken down to get to that point. It’s the goalie’s job to make stops but if the entire team quits in front of him then I don’t blame him.

Despite my last comment in the GDT, this is not a loss that the Red Wings can blame the refs on. 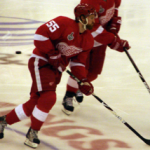 Chris Osgood is gonna take a lot of blame for this loss - and he should, to a certain extent - but the Phoenix empty-net goal pisses me off so I put the blame for killing Detroit's chance at tying things up on Niklas Kronwall.

Both the Chief and Malik have commented multiple times on the Jimmy Howard call-up and Chris Osgood's removal from the Red Wings' lineup so I'll throw my two cents in, too.