The Red Wings hit the road for the first time in about two and a half weeks, visiting the Atlanta Thrashers tonight.

The big news is that Jiri Hudler will be the healthy scratch tonight, with Justin Abdelkader bumped up to the second line in his place. Huds is less than thrilled about that but I say too damned bad.

Somewhat ironically, Hudler did score in Detroit’s last visit to Atlanta, a 6-3 win on March 20, 2009. It was a nice breakaway goal. I was there.

The Wings are 9-3-0 against Atlanta all time, though Saler questions whether I can be believed about that. Detroit is also 12-18-7 on November 24th going into tonight’s game, not that it means anything. 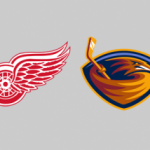 Detroit goalie Chris Osgood kept a shutout going for just over fifty minutes Friday night, finishing the night with 31 saves en route to a 6-3 win for the Red Wings over the Atlanta Thrashers.

Some early morning notes before I head off to Atlanta...