Osgood went to the hospital for tests. His status for the team’s three-game Western Canada road trip is unknown.

Jimmy Howard will return to the Detroit crease as the Red Wings visit the Calgary Flames on Wednesday and could play back-to-back in Edmonton and Vancouver over the weekend.

Defenseman Jonathan Ericsson will also return to the Red Wings’ lineup on Wednesday. Doug Janik was sent back to the Grand Rapids Griffins to make room in the lineup.

The Detroit News reported on Wednesday that Detroit Red Wings netminder Chris Osgood is expeced to miss 2-6 weeks with a broken bone near the wrist of his left hand. 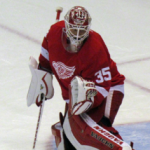 There are reports that both Jimmy Howard and Jonathan Ericsson have re-signed with the Red Wings. The team hasn't made an announcement but Malik pointed out a couple signs that it could be true.