Though financial terms were not announced, several sources report that he will make $1.25 million on a one-year deal. Reportedly there are performance-based bonuses that could push Modano’s pay up to $1.5 million.

The 40-year-old Modano had played his entire career for the Minnesota / Dallas franchise.

He joins a group of four Red Wings with ties to Michigan, having grown up in Westland. Justin Abdelkader was born in Muskegon, Brian Rafalski is from Dearborn, and Drew Miller grew up in East Lansing.

The Red Wings will hold a press conference at 2:00 PM on Friday to introduce Modano as a member of the team. He is expected to don a winged-wheel jersey with number 90. 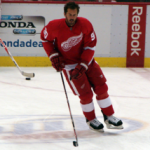 The Detroit Free Press reports that the Detroit Red Wings will announce the signing of free agent forward Mike Modano on Friday.

Helene St. James of the Freep has been on top of today's breaking Mike Modano news, having broken the latest update last night and added another today.