The Detroit Red Wings returned home from their five-game road trip Thursday night but the while the venue changed the results stayed the same as they dropped their fourth decision in a row, this one a shootout loss to the San Jose Sharks.

Patrick Marleau scored the only goal of the tiebreaker, faking out Jimmy Howard to win the game for San Jose.

The Red Wings had opened the game’s scoring with 7:47 left in the first period when Johan Franzen snapped a shot from the right faceoff circle over the shoulder of Sharks goaltender Evgeni Nabokov while on a power play.

Just 35 seconds later Joe Thornton tied the game, crashing the net and banging the puck in from the side of the crease after it bounced off the back boards on a shot by Niclas Wallin.

Dwight Helminen put the Sharks in front with 10 seconds left in the period, taking a centering pass after being left uncovered in the slot and snapping a shot into the open side of the net.

Jason Williams, the subject of many trade rumors with scouts from ten teams in the stands, tied the game with 7:05 left in regulation, skating around one San Jose defender before lifting a shot over Nabokov’s shoulder.

Nabokov stopped a career-high 50 shots on Detroit’s 52 chances in earning the win. Howard made 24 saves on 26 San Jose shots.

The Red Wings went 1-for-5 on the power play while the Sharks were scoreless in two tries with the extra skater.

Detroit plays their last game before the Olympic break on Saturday as they host the Ottawa Senators.

The Detroit Red Wings were eliminated from the Stanley Cup Playoffs on Saturday night, dropping a 2-1 decision to the San Jose Sharks.

The San Jose Sharks scored three goals in a 1:19 span in the first period Thursday night, putting the Detroit Red Wings in a hole that they couldn't dig out of. 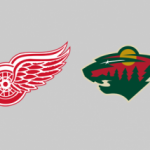