The Red Wings visit Chicago tonight with a chance to eliminate the Blackhawks, carrying a 3-1 series lead into Game Five of their Western Conference Semifinal matchup.

For the third consecutive game, the Detroit Red Wings managed only one goal through regulation, dropping a 2-1 shootout decision to the Chicago Blackhawks on Sunday afternoon. 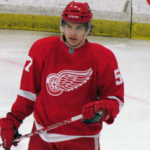 One night after a 4-1 win over the Pittsburgh Penguins, the Detroit Red Wings were held scoreless in a 2-0 loss to the Chicago Blackhawks. It was Detroit's second game of their eight-game preseason schedule.