You think I’m gonna recap tonight’s game? Not a chance in hell.

Here’s the deal: The Dallas Stars played a fine game. I’m not willing to say they deserved to lose. They might have won anyway. The butterfly effect says that anything after Brad May‘s third-period no goal would have changed; we can’t count on Dallas’ late power play goal happening but it could mean the Stars would have scored three instead.

That doesn’t matter to me. My only concern is that calling off the goal was simply the wrong call. Absolutely, unequivocally wrong.

For those who don’t want to see it on YouTube, here’s the recap of the play:

Brad May gets the puck in front of the net and backhands it on goal. The puck slips between the post and Alex Auld’s pad to get into the net, where Auld pushed it against the inside of the goal.

No one sees that the puck is in the net until after play is blown dead, at which point the Wings begin celebrating. The team of officials confer and it looks like the “War Room” in Toronto phones in their thoughts.

Yes, the whistle that came seconds after the puck was in the net stopped the play in time for the goal to not count.

We’ve seen the “intent to blow the whistle” bite the Wings in the ass before. Play is technically dead as soon as the official decides to blow play dead, not when the whistle actually blows.

That can’t apply here, though.

Leading up to the puck going into the net it was never covered up. The puck was live when May shot it and it was in play the entire way into the net. If the officials intended to blow play dead they would have been doing so in the middle of a shot.

That’s what the normally-reserved Mike Babcock called it. I dare anyone to put it more calmly.

This is the kind of play that gives credence to conspiracy theories. Either the official intended to blow the whistle in the middle of a play or he deliberately called a good goal back.

Neither is a scenario that I find acceptable in a supposed major sports league. 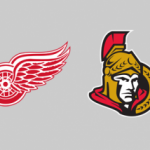 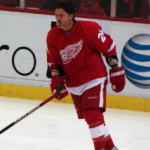 The NHL has attempted to explain what happened on Brad May's no goal last night while simultaneously raising another question.

Running on about four hours of sleep, we'll see how today goes. In the meantime, here's another thought about the non-goal at the end of last night's game.