The jersey number retirement debate is back on thanks to a blog post by Greg Eno.

Eno suggests that the Wings should retire #30 for Chris Osgood. Over at A2Y, the Chief agrees.

Chris Osgood is my all-time favorite goalie. I wouldn’t complain if his number were raised. I just don’t believe in the idea enough to push for it.

I’m wondering if a semi-retired state needs to exist. Something less than retired but more than the “honored” status that the Toronto Maple Leafs use. The Leafs have strict rules for retiring a player’s number but they will hang banners to honor a player while leaving his number in circulation.

My version of an honored number would be one mostly kept out of circulation by the Wings not assigning it to any of their prospects as they come onto the team. It would technically be available if the Wings wanted to give it to someone but the player would have to have earned the number first.

I just see this as one way of respecting the team’s history without lowering the standard required to have a number retired. Osgood and the rest of the core of this dynasty deserve recognition but not one reserved for players that are among the best of all time.

Detroit Red Wings forward Tomas Holmstrom is set to retire, according to reports by Chuck Pleiness of the Macomb Daily and Ansar Khan of MLive. 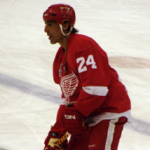 Twitter is abuzz with the news that Red Wings defenseman Brian Rafalski is set to retire.