The Detroit Red Wings held off early and late pushes by the Chicago Blackhawks Thursday night en route to a 3-2 victory. It was the first win of the three-game old season for the Red Wings.

Chicago carried the play early, outshooting the Wings 12-7 in a scoreless first period and getting the game’s first goal in the second.

The ‘Hawks opened the game’s scoring when Patrick Sharp tipped a pass from Kris Versteeg past Detroit goalie Chris Osgood just 1:23 into the middle frame.

Momentum shifted to the Red Wings several minutes later when Niklas Kronwall and Brad Stuart led the team in killing a long five-on-three.

Just past the game’s midway point Nicklas Lidstrom put Detroit on the board, bouncing a cross-ice pass off the skate of a Chicago defender and past netminder Cristobal Huet with the Wings on a power play.

Kris Draper converted on a bouncing puck turnover at the Chicago blue line with 3:45 left in the period to put Detroit out in front. Draper coralled the puck on the right wing and ripped a shot into the top of the net.

Just 1:34 later the Red Wings were up by a pair when Johan Franzen tapped home a loose puck behind Huet on a power play. Pavel Datsyuk had fired a shot from the right wing that deflected off of a screening Tomas Holmstrom to slip past Huet.

Versteeg added a power play goal with 9:36 remaining in the third to pull Chicago to back within one but the ‘Hawks couldn’t close the gap, even after outshooting Detroit 15-4 in the final frame and ending the game on a power play and with an empty net.

Chicago outshot Detroit 34-23 on the night. Osgood made 32 saves while Huet stopped 20 shots.

The Red Wings scored on two of their five power play opportunities. The Blackhawks converted once in as many chances with the extra attacker.

Detroit newcomer Brad May – signed to a one-year deal earlier in the day – made his debut with the team. He fought Radek Smolenak midway through the first period. 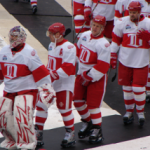 The Detroit Red Wings scored three late goals Friday night to come from behind and earn a 3-2 victory over the Chicago Blackhawks in overtime.