Red Wings Central has published Detroit’s training camp roster and this year there aren’t a lot of surprises with the sweater numbers players will be wearing.

Todd Bertuzzi will keep the #44 he has worn for most of his career, including during his first stint in Detroit. Newcomer Patrick Eaves, who also typically wears that number, has taken #17.

Jason Williams, also in his second run with Detroit, returns to his familiar #29.

Depth defenseman Andy Delmore did not take the #15 he wore last time he was in camp with the Wings, instead going with #4 as his usual #5 is taken by Nicklas Lidstrom.

Doug Janik has inherited Mikael Samuelsson‘s #37, while other newcomers Kris Newbury and Jeremy Williams will wear #32 and #15, respectively.

As I mentioned last year, I look forward to training camp not because it marks the start of the start of the season but because I'm a sweater numberphile and as camp rosters are released we see what players are switching numbers.

Numbers Game 2009: Bertuzzi and the Prospects

Two things have come up since my look at possible Red Wing sweater numbers for the 2009-10 season on Sunday, the Wings signed Todd Bertuzzi and the team's prospect tournamant roster was announced on Red Wings Central. 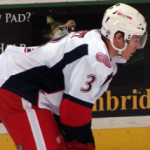 With Saturday's release of the Red Wings 2011 Training Camp roster by Sarah Lindenau of the The Left Wing Lock, the final changed jersey number for the upcoming season is known.