Cleary scored the game-winning goal in Game Seven against the Anaheim Ducks on Thursday, then moved on to score twice against the Chicago Blackhawks on Sunday to carry Detroit to a 5-2 win.

His first goal was a wrister from the left circle, beating Chicago goalie Nikolai Khabibulin over the shoulder at 8:23 of the first period. Cleary created the play himself, stealing the puck from Brent Seabrook at the Detroit blue line and racing down the left wing boards.

Cleary’s goal knotted the game up at one, as the Blackhawks had taken an early lead when Adam Burish capitalized on a miscommunication between Chris Osgood and Jonathan Ericsson to steal the puck and slip it between Osgood’s pads just 5:25 in.

Johan Franzen put the Red Wings into the lead with 3:22 left in the second, beating Khabibulin on a wraparound.

Kris Versteeg tied the game, banging home a rebound from the side of the net on a Chicago power play at 3:12 of the third period.

Mikael Samuelsson put Detroit back in front 4:19 later, snapping a shot from the right faceoff dot past Khabibulin for a 3-2 lead.

Cleary added his second 1:27 later, tipping a Franzen shot in behind KHabibulin.

Henrik Zetterberg added an empty net goal to finish off the Blackhawks, giving the Red Wings a 1-0 lead in their series.

Osgood finished the game with 30 saves on 32 shots against. Khabibulin stopped 38 of 42 Detroit shots.

Game Two will be Tuesday night from Joe Louis Arena.

Cleary Scores in Return but Red Wings Fall to Flyers

Danny Cleary scored in his first game back after missing three with a groin injury but it wasn't enough for the Detroit Red Wings, who played an uninspired game in losing to the Philadelphia Flyers.

Tomas Holmstrom scored twice and three other Red Wings had multi-point nights as Detroit picked up a 4-1 win over the Chicago Blackhawks Tuesday night. 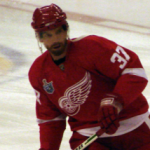