The Red Wings were without leading scorer Marian Hossa, who left the game on a stretcher early in the first period after crashing headfirst into the boards. Hossa did not lose consciousness and all tests for injury came back negative.

With Hossa out, the Wings’ depth players were key in the game’s scoring. Tomas Kopecky has a goal and two assists while Kris Draper, Niklas Kronwall and Valtteri Filppula all scored goals.

Henrik Zetterberg was the only star player to score for Detroit.

Kopecky opened the game’s scoring with a shorthanded goal with 5:06 remaining in the first period. Pavel Datsyuk carried the puck into the St. Louis zone and Kopecky raced in behind him, picking up the puck and jumping behind the Blues’ defense before reaching around goalie Chris Mason to slide the puck into the net.

Zetterberg scored a power play goal 3:24 into the second period to put Detroit up by a pair, banging home a rebound after Mason stopped several shots in a row.

At 7:52 of the third Draper opened the floodgates with the first of three goals in the final frame, tipping a wide shot by Kopecky past Mason.

Kronwall scored a power play goal 3:02 later, blasting a shot from the blue line off Mason and into the net.

Filppula scored with 3:30 remaining in the game just as a Detroit five-on-three expired. Kopecky picked up a loose puck at one side of the crease and sent it across to Filppula to lift into the net.

With the last goal coming at the exact moment the penalties expired, the Red Wings finished the night two-for-seven on the power play.

Hossa is expected to be with the team when they travel to Denver for Wednesday’s matchup with the Colorado Avalanche. Detroit head coach Mike Babcock was doubtful he would play… The shutout was Osgood’s first of the season.

The Detroit Red Wings scored four times in the second period Saturday afternoon, carrying them to a 5-2 win over the St. Louis Blues. Three of the goals came in a 46 second span. 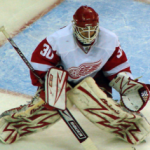