As previously mentioned, Kirk Maltby will be a healthy scratch for tonight’s Red Wings – Ducks tilt. Derek Meech takes his place in the lineup, interesting in that it seems coach Mike Babcock would rather go with a defenseman playing forward than the veteran grinder.

Chris Osgood makes his second straight start. It marks the first time he’s done that since returning from injury earlier this month. I assume that means Ty Conklin will go tomorrow night against the LA Kings.

I’ll be up for this one unless something crazy happens but I’ll probably spend the entire night bitching about how late it is. 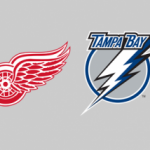 The Red Wings look to bounce back from their OT loss to Pittsburgh on Tuesday in Tampa tonight. It's a 7:30 start time on FSN.

The Red Wings go into tonight's matchup with the Los Angeles Kings with the same lineup they used to shut out the San Jose Sharks on Thursday.

This pregame report is brought to you by hand-me down-snowblowers. Hand-me-down snowblowers, clearing my driveway since about 45 minutes ago.