Nicklas Lidstrom and Pavel Datsyuk will be on the ice at Montreal’s Bell Centre on January 25. It will be Lidstrom’s tenth consecutive All-Star appearance and Datsyuk’s third trip.

Detroit Red Wings defenseman Nicklas Lidstrom and head coach Dave Lewis will be a part of the NHL's Western Conference All-Star team again this season. Lidstrom was named a starting defenseman and Lewis was named the team's head coach when starting lineups were announced Thursday night. 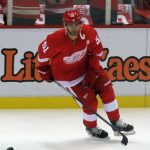