Goaltender Ty Conklin made his first home start as a member of the Detroit Red Wings a memorable one, stopping all twenty shots he faced in leading the Wings to a 4-0 win over the Edmonton Oilers.

Conklin is now 5-1 with Detroit.

Niklas Kronwall‘s five-on-three goal 6:11 into the game would have been enough for the win but it didn’t have to be.

Kronwall scored on a quick wrister from the right faceoff circle after jumping in from the point to take a pass from Henrik Zetterberg.

Just 3:00 into the second period Mikael Samuelsson put Detroit up by a pair, tipping a Brett Lebda pass from the corner past Edmonton goalie Dwayne Roloson.

Jiri Hudler deflected a shot off of defenseman Sheldon Souray and into the net with 5:42 left in the second and Johan Franzen scored on a great individual effort midway through the third, outwaiting Roloson before lifting a shot from at the goal line off the goalie’s glove and into the net.

Conklin was rarely tested in what might have been Detroit’s best defensive effort of the season. His stops on back-to-back two-on-ones in the second period kept Edmonton from getting back in the game.

Roloson made 37 saves on 41 shots in net for the Oilers.

Chris Osgood will get his chance against Edmonton on Thursday when the Red Wings visit Rexall Place for a rematch against the Oilers.

The assist on Samuelsson’s goal was Lebda’s first point of the season… Darren McCarty fought Zach Stortini three minutes into the game.

The Detroit Red Wings' home winning streak ended at thirteen games Friday night as they fell to the Edmonton Oilers, 4-3, in a shootout.

Detroit goaltender Ty Conklin stopped all 23 shots he faced Thursday night, leading the Red Wings to a 4-0 win over the Los Angeles Kings. 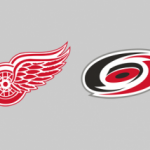 Backup goaltender Ty Conklin stopped 27 of 28 shots Monday night, leading the Detroit Red Wings to a 3-1 win over the Carolina Hurricanes in his first regular season appearance with Detroit.