“We expected. We talked to five, six teams in the past week that had some interest. Thought we were close on one front to a deal that fell through.”

The Red Wings will not make a roster move to replace Quincey, who didn’t dress for either of Detroit’s first two games. 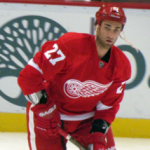 Red Wings defenseman Kyle Quincey scored in his return from injury on Wednesday night but it wasn't enough for Detroit, as the Los Angeles Kings rallied in the third period for a 2-1 win.

Matt Ellis has been claimed in waivers by the Los Angeles Kings. The Red Wings had been trying to send him down to Grand Rapids.